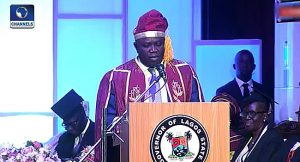 Governor Of Lagos State, Mr Akinwunmi Ambode has urged Nigerian youths to pursue excellence in all their dealings as according to him, it is the only way to build the kind of nation they desire.

He said this on Tuesday while addressing the topic: “Inclusion, the path to a new nation” at an inauguration ceremony of the 12th Vice Chancellor of the University of Lagos (UNILAG).

The governor, who is an alumnus of the institution, stated the positive roles the University has played in Nigeria and Africa.

He noted that he is the first alumnus to become governor of Lagos State and expressed hope that he won’t be the last.

He, however, admitted that while not everyone can be the state governor, everyone can make a difference in their own ways.

Governor Ambode also believes that change can only happen when those clamouring for it, become the change themselves.

He said: “All of you cannot be state governors, yet in your own way, you must be leaders that correct the direction of our nation by improving our social attitude and relying more on conscience than on cunning, in the conduct of its affairs.

“We must break down old walls, in order to erect a better home. Good things do not just happen, bad and evil come easily because they are the product of common human feelings and lapses left too long uncorrected.

“But good and fine things are more difficult because they always must be crafted with adept care.

“Excellence is never by accident. It is the product of wise exertion for you to answer the call of this nation, for your generation to be better than preceding ones, you must strap yourself to courage.

“You must pair beyond the immediate to envision a better future and you must have the enlightened decency to refuse to yoke yourselves to ancient and irrational biases and hatreds that have no place in the nation we seek to build.

“We all must understand this important reality. None of us chooses the world into which we are born, yet we can choose to make of that world, what we want it to be,” he stated.

Kindly complete the form to submit your complaint. Your privacy and confidentiality is guaranteed.